The first time ever that an astronaut used a jet pack and drifted away from the spacecraft. They were totally adrift but in control from the craft.

NASA’s intention is to make the most of a good situation and that is definitely on show here, even though if this went wrong it would spell disaster for the first humans in space.

What pioneering spirit, what courage is on display in this mesmerising video. Been afraid of the unknown isn't necessarily a bad thing. It's a survival instinct, a survival instruction. But one thing that this video does is, It encourages anyone who watches this to sometimes do is "just let go of your fears and put your faith in the planning that you've worked hard at".

NASA’s great at pushing the envelope, what was done here in brand new uncharted space was a pioneering but extremely dangerous and thrilling all at the same time, leap into the void, the abyss. And yet again humans have conquered the unknown and the flat out craziness - that's one way of describing what we're seeing.

But seeing it from the Astronauts point of view must be on the order of "terrifying and very vulnerable". I mean, come on, just imagine for one second that it was you drifting off forever without the ability to get back to the relative safety of the spacecraft...

These are the photographs that would be in the human photo book if we kept one like we do with the family photo books. 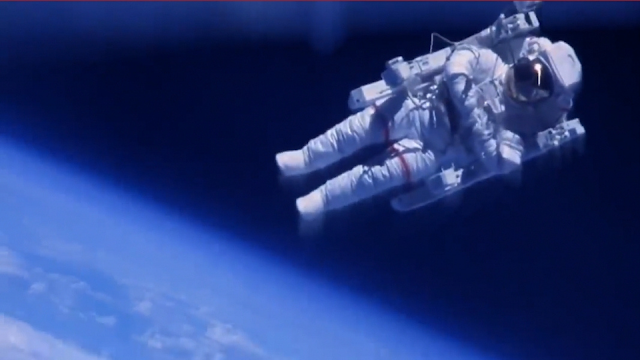 On Feb. 12, 1984, astronaut Bruce McCandless, ventured further away from the confines and safety of his ship than any previous astronaut had ever been. This "space first" was made possible by a nitrogen jet propelled backpack, previously known at NASA as the Manned Manuevering Unit or MMU.

Can you imagine any Astronaut in todays world wanting to do this, it wouldn't be possible unless they were tethered on to the main capsule, spacecraft. The red tape, the danger assessment, the precautions, the training and the rest of the long list of safety approaches would most likely be possible but only if the Astronauts is anchored to Earth!

Imagine a 900 mile long tether or a safety rope as long as that lol but in all seriousness, a study was conducted and the thought of a dead Astronaut flying around the Earth or more horrendous than that would be a dead Astronaut stuck on the Moon - the American public wouldn't be able to handle it. 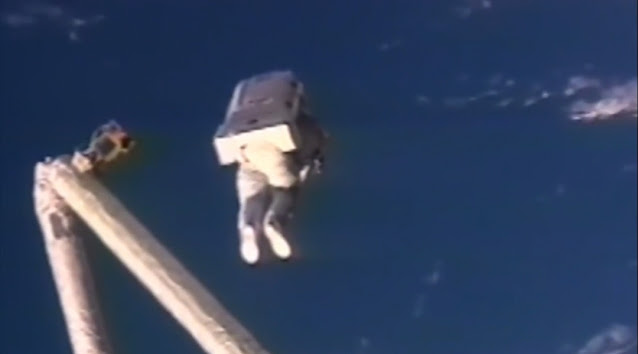 In fact one if the mission controllers during the Apollo Moon Landings was said to of been the most scared of an Astronaut having died on the Moon surface through an accident etc and not being able to recover him. He said that just the thought of every US citizen looking up at the Moon knowing that there was a US Astronaut left on the Moon gave him nightmares, it terrified him and he nearly had a breakdown because of this. 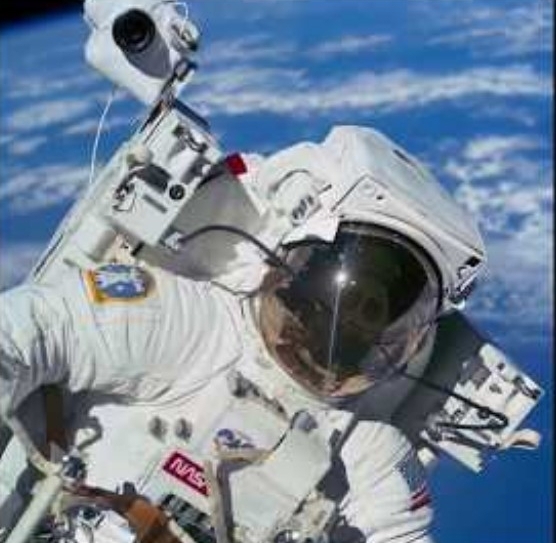 Okay, so I wasn't expecting this but damn, just take a look at the reflection on tge visor because we can see what is reflected on the outside of the visor but also what's reflected onto the inside of the helmets visor also... I think I can see a very strange looking face with two huge black 👀 almost the same type of thing you would expect an Aliens face to look like?

The thing is though, he's probably right because just the thought alone of that would be heartbreaking!

After a series of test maneuvers inside and above Challenger's payload bay, McCandless went "free-flying" to a distance of 320 feet away from the Orbiter. 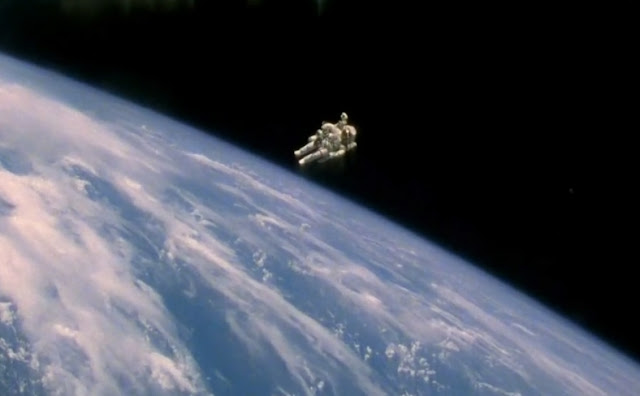 This stunning orbital panorama view shows McCandless out there amongst the deep black of space and the even deeper blue of Earth.

Drifting away from the spacecraft isn't a good way to learn of a fault in the jet pack. But, luckily enough though because NASA works on the principle of every eventuality must be covered or as bezt as can be.

Credit: When We Left Earth mini-series