Many scientists have written a paper together because they have researched NASA images that show Alien mushrooms and spores inc black spiders also.

This latest information will help you to understand the deep divide in the scientific research community and NASA if anything else, regarding life on Mars.

After reading this post and the article by the 11 Scientists plus the pkaces I've credited and referenced, you'll definitely get it that 11 Scientists putting their careers on the line all at once means something. Their research is sound but not definitive proof. Just read on though... 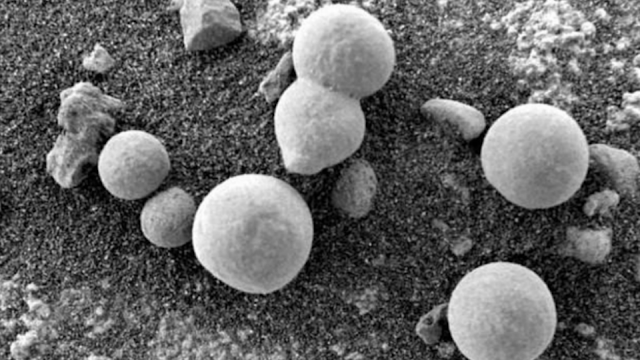 Credit: Photo taken by Opportunity on its 257th day on Mars NASA/JPL/Cornell/USGS

Get a load of this comment from one of the 11 scientists challenging NASA:

They said the pattern was “repeated each spring and may represent massive colonies of black fungi, mould, lichens, algae, methanogens and sulphur-reducing species. Black fungi-bacteria-like specimens also appeared atop the rovers.” “Growth, movement, and changes in shape and location constitute behaviour and support the hypothesis there is life on Mars,”

The information that everyone gets, even though it's the same seems to be getting different responses from people... What does it mean I hear you ask? Well, it means that either someone is lying or someone wants to hold off from revealing life exists on Mars or something else entirely that the public doesn't have access to or know anything about but "certain scientific communities are well aware of" and wants the public to know because it's our right to know.

It means that there's still plenty of people on the side of truth and not spreading disinformation. Aliens exist, I know that and I'm not out rioting or losing my marbles. That argument was never ever fully explained by anyone.

The answer is evidence! 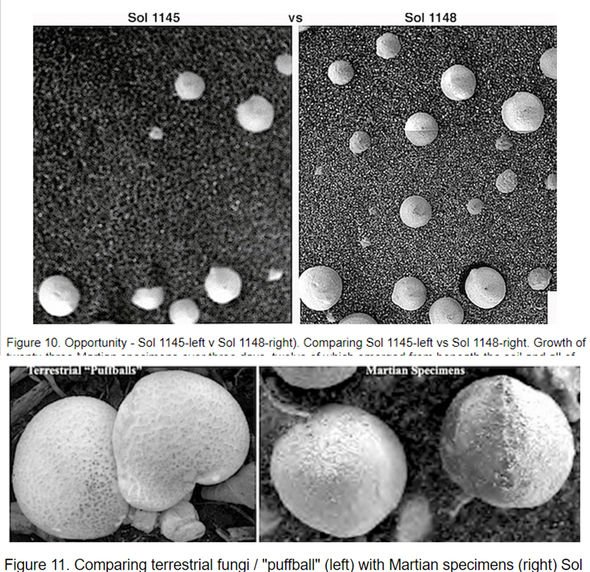 Researchers will always go wherever the evidence will take them but the Government will always stay put on one stupid regurgitated answer which is with the plan. The plan is to deny Aliens exist, only humans exist, life as we know it only resides on Earth and ancient history belonged to tge Dinosaurs.

This is why we keep on seeing systematic, systemic divides and we are seeing science itself butt heads with NASA, Government and the people. If NASA is sending cameras to gather the information, why do they keep on saying what we're seeing isn't what we're seeing but instead want us to believe thsir pre-planned garbage.

A group of scientists say they have found signs of life on Mars, with photos of fungi-like specimens resembling puffballs appearing to emerge from the soil on the red planet and increase in size. But other researchers said the evidence was speculative and far from enough to support the conclusion.

In a paper accepted for publication in the journal Advances in Microbiology (Research Gate full Article Link Pdf) the 11 researchers from various countries and institutions said an analysis of photos taken by previous Mars missions showed “white amorphous specimens within a crevice change shape and location then disappear” within three days. There were also signs of thousands of black spider-like forms that grew up to 300 metres in the spring and disappeared by winter.

I can guarantee you that we will continue to see scientists and researchers from all over the world break away from the "one world Government" and start to follow the path of truth instead of following the prescribed procedure passed on down by the all seeing eyes. In other words, the Government.

This "certain thing called life" is what continues to be the first and foremost thorn in the side of the Government and the aligned universities, schools, religious institutions and other authorities aligned with covering up the undeniable proof of Alien life. The alignment between NASA, the Government and the serious researchers is cracking but what the hell is creating this deep divide?

It's overwhelming evidence that life flourished on Mars.

In fact, that's pretty much an understatement because it seems like it's every six month's that we hear about yet another discovery on Mars - only for the establishment to come out fighting without any secondary research and instantly cast doubt on it.

Literally, the very next day they will put out information which is released typically by the nay sayers who come out of their hiding places and say it's not life. I bet they haven't even seen the evidence!

See, this post is a great indication (or peep behind the curtain so-to-speak) of the bigger picture as giving an instant answer straight away without an investigation whatsoever into the fact that something has changed from image to image grown on Mars to a serious question of the pre-planned lies orchestrated by the powers that be.

Because, in their minds anything other than the pre-planned prescribed statement is BS or poppycock! Call it witchcraft, call it voodoo, call it anything you want too, but don't call it life in the universe otherwise you can expect to be ridiculed.

The most ironic thing ever though, is that if NASA wants more funding, it's says it's looking for life in the universe.

Here's a total anomaly that NASA doesn't like you to know:

It appears that Mars is a moist wet planet. In fact, rover Curiosity found 2-4% moisture in Martian soil samples. If spores were to come in contact with moisture, they would germinate; and this supports evidence that fungi, lichens, and algae may be flourishing on Mars.