Developed by US and Japanese scientists, the bees would be fitted with sensors and wireless communication devices so they could map terrain, take samples, or even look for signs of life, such as methane emissions.

A swarm of robotic bees, nimble enough to fly across the surface of Mars and explore the Red Planet’s nooks and crannies, is being funded by Nasa. The cyber-insects, dubbed Marsbees, are the size of bumblebees but have giant wings to generate sufficient lift to hover in the Martian atmosphere, which is around 100 times thinner than Earth’s.

Developed by US and Japanese scientists, the bees would be fitted with sensors and wireless communication devices so they could map terrain, take samples, or even look for signs of life, such as methane emissions. 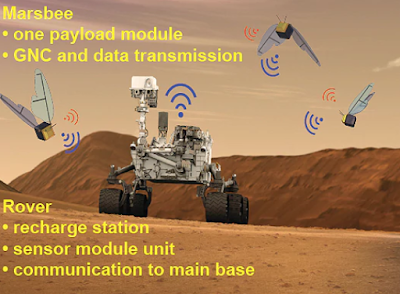 The robot bees would be deployed from a rover, like Nasa's curiosity CREDIT: UNIVERSITY OF ALABAMA
Although rovers are already exploring Mars, they move incredibly slowly. Since landing in 2012, Nasa’s Curiosity rover has travelled just 11.2 miles. The Marsbees, would have a mobile base, such as a rover, where they could recharge after they had been deployed. Dr Chang-kwon Kang, of the University of Alabama, said: “Marsbees are robotic flapping wing flyers of a bumblebee size with cicada sized wings. “They are integrated with sensors and wireless communication devices. The swarm of Marsbees can significantly enhance the Mars exploration mission.”

The project is one of 25 early stage innovations which have been selected by Nasa from 230 proposals as part of the Space Agency’s Innovative Advanced Concepts (NIAC) scheme. All receive a cash boost of around $125,000 from Nasa to fund research for nine months and can then apply to be selected from Phase II funding. "The NIAC program gives Nasa the opportunity to explore visionary ideas that could transform future Nasa missions by creating radically better or entirely new concepts while engaging America's innovators and entrepreneurs as partners in the journey," said Jim Reuter, acting associate administrator of Nasa’s Space Technology Mission Directorate. "The concepts can then be evaluated for potential inclusion into our early stage technology portfolio." Other schemes selected include a steam powered jumping robot named ‘Sparrow’ capable of exploring icy ocean world’s such as Saturn’s moon Titan, which many experts believe holds the best chance for finding life in the galaxy. 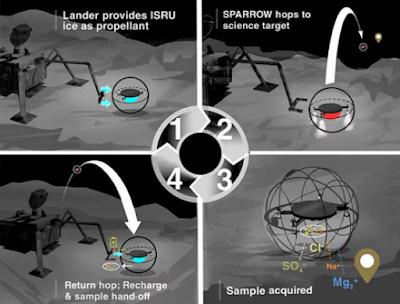 Explaining the project, Gareth Meirion-Griffith, of Nasa’s Jet Propulsion Laboratory, said that the hopping motion of Sparrow could help even when teams did not know the terrain. “The employment of a multi-hop architecture allows for the rapid traverse of great distances, enabling a single mission to reach multiple geologic units within a timespan conducive to system survival in a harsh radiation environment. “A propulsive hopping technique allows for complete terrain agnosticism.” Nasa's Jet Propulsion Laboratory has also received funding for a shapeshifting robot which would change depnding on whether it was flying in the atmosphere, rolling on a smooth surface, floating on lakes, or exploring caves. The bot, dubbed 'shapeshifter' is a flying amphibious robot (FAR), comprised of smaller robotic units, referred to as cobots which can break away to carry out independent tasks. Aliakbar Aghamohammadi, project leader, said: "Shapeshifter can morph into a ball that rolls on the surface, a flight array that can fly & hover above-surface and move in subsurface voids, and a torpedo-like structure to swim under-liquid efficiently "It morphs into other functional systems to carry out a diverse set of tasks. Examples include transporting large and heavy objects, traversing long distances with minimal power consumption and creating communication networks to communicate to surface from deep hard-to-access areas." 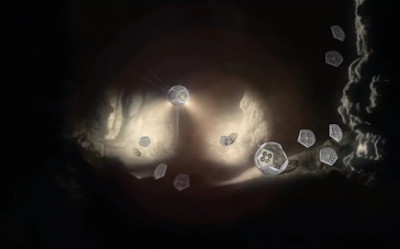 The University of Maryland also won funding to develop a ‘biobot’, a rover type robot, which would trundle alongside astronauts on lengthy missions, connected by an umbilical cord. to provide them with oxygen, food and water. The companion robot would also be able to carry communications equipment and high-resolution cameras.


Life is already on Mars, so these robot Bee's are to keep an eye on the Martians!

Dr David Akin, said: “Astronauts involved in future lunar or Mars exploration will be on the surface for weeks or months rather than days, and will be involved in regular EVA (extra vehicle activity) operations. “It is clear that planetary surface exploration activities would be greatly improved if the astronauts did not have to carry a portable life support systems to maintain life support function.”