It's about time we all faced up to the fact that a pole shift might happen and how we could live through it? Would it be worth preparing for it? Is it worth preparing for and could we survive a GEOMAGNETIC POLE SHIFT? Earth has experienced multiple pole shifts throughout its history with the last one having occurred approximately 786 000 years ago. “Sometimes you won’t have a flip for about 40 million years; other times there will be 10 flips in 1 million years,” Wang says. “On average, the duration between two flips is a few hundred thousand years. The last flip was around 780 000 years ago, so we are actually overdue for a flip.”

A group of researchers have studied ancient volcanic rocks to conclude that Earth's magnetic field is a long time away from "flipping" even if the magnetic field intensity is reducing fairly fast. This is because Earth's current magnetic field intensity is double the long term average and it will take many thousand years for the poles to "flip" again. A fast approaching magnetic pole shift is a mainstay in many conspiracy theories. We literally have hundreds of websites and thousands of YouTube videos announcing the impending arrival of the dreaded pole shift and describing the wholesale destruction that will follow. Link to the best video here.


While the timing is pure guesswork, what these conspiracies may at least be partially right about is the consequences of such an event. A geomagnetic pole shift is a process which will drastically weaken the Earth's magnetic field for a considerable period of time. During this time, X-ray flares and other forms of concentrated solar radiation will reach the Earth's surface and play havoc with all things electric.

A pole shift could potentially destroy every electric instrument on Earth. From the global energy grid, to medical equipment and household appliances, everything is extremely vulnerable in such a scenario. Additionally, contact with such high levels of solar radiation could significantly increase the incidence of cancer worldwide and it could actually mutate the genome of every living thing on our planet. 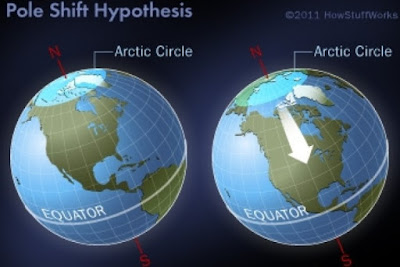 However, a group of researchers from the Scripps Institution of Oceanography at the University of California at San Diego and MIT’s Department of Earth, Atmospheric and Planetary Sciences, led by Huapei Wang, an MIT postdoc, have studied Earth’s average, stable field intensity over the last 5 million years and found that the current magnetic field intensity is still twice the long-term average. This has led them to infer that a geomagnetic pole shift event is not in the offing in the near future and could potentially be thousands of years away. 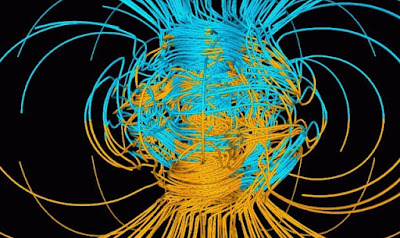 Follow this link to a post that says NASA is saying there's going to experience a full POLE SHIFT?

Studying the history of pole shifts

Earth has experienced multiple pole shifts throughout its history with the last one having occurred approximately 786 000 years ago. “Sometimes you won’t have a flip for about 40 million years; other times there will be 10 flips in 1 million years,” Wang says. “On average, the duration between two flips is a few hundred thousand years. The last flip was around 780 000 years ago, so we are actually overdue for a flip.”

The most telling sign of a pole shift is a geomagnetic field intensity which is significantly below its long term average. Scientists have been able to accurately record Earth's geomagnetic field intensity for the last 200 years using ground stations and satellites . However, the same cannot be said about older time periods going back a few million years. Data associated with these time periods remains sketchy and can be described as estimations at best. The group of researchers led by Wang, used two sites to collect volcanic rocks.

Volcanic rocks are known to store details about geomagnetic field intensity when the lava firsts cools down and transforms into rock. Once both teams had collected the rocks and transported them to their respective laboratories, the rocks' natural remnant magnetization was carefully measured. Then the rocks were heated and subsequently cooled in the presence of a known magnetic field. This was done to measure the rocks' current magnetization after cooling.

A rock's remnant magnetization is always proportional to the magnetic field in which the cooling takes place. Using the data so collected, the researchers were able to calculate the peak of the ancient geomagnetic field intensity at both the equator (15 microtesla) and at the poles (30 microtesla). They also found that current field intensities at both the locations were around 30 microtesla at the equator and roughly 60 microtesla at the poles.

Since the current field intensity was found to be at least double the long term average, the researchers concluded that the Earth's geomagnetic field intensity is comfortably high, even though it may have started reducing recently. “That means today’s value is anomalously high, and even if it’s dropping, it’s dropping to a long-term average, not from an average to zero,” Wang says.

A Pole shift is far far away Independent of the latest findings, a number of scientists have been proclaiming that Earth's geomagnetic field intensity is falling rapidly and that a pole shift is quite overdue. Wang blames this on false interpretation of data. So far, scientists have collected geomagnetic field data from individual grains of rocks and they simply assumed that the field intensity of the individual grain matches that of the entire rock.

Wang has pointed out that this method is grossly incorrect beyond a certain size as in larger grains, unpaired electron spins assume various orientations in different domains of the grain, thereby complicating the field intensity picture. Wang has developed a technique to correct such common distortions and has applied this technique to the Galapagos rocks collected by his team. The resulting data is much more accurate than earlier instances according to Wang. When asked to predict the date for the next pole shift, Wang remains noncommittal.

“What I can say is, if you keep a constant present-day decrease rate, it will take another 1 000 years for the field to drop to its long-term average,” Wang says. “From there, the field intensity may go up again. There’s really no way to predict what will happen after that, given the random nature of the magnetohydrodynamic process of the geodynamo.”

According to John Tarduno, a professor of geophysics at the University of Rochester, since the current finding suggest that the Earth's geomagnetic field intensity is much higher than the long-term average, scientists may have to reconsider their current understanding of the variables that affect Earth's magnetic field. “They’re talking changes on much shorter timescales a million years or less and big changes in the dipole components of the magnetic fields,” Tarduno says. “That’s actually a challenging idea. If it’s correct, that really makes us have to think differently about the dynamo and how those changes could actually happen.”