While the Mars Rover was taking pictures on Mars it has snapped something unusual and very interesting. It took pictures of a real bird flying past the cameras on the Mars Rover. The bird was flapping it's wings and it flew in from the left of the screen and continued in the middle top of the frames and then left on the right top of the screen. This is a deal breaker and a real big problem for NASA. Why, because these images where taken from the official multimedia website of NASA and as a result, these are then official images which leave nothing to the imagination and everything to speculation. NASA has got to reply to this anomaly and not the usual answers will do this time, they need to fess up to the live birds on Mars. 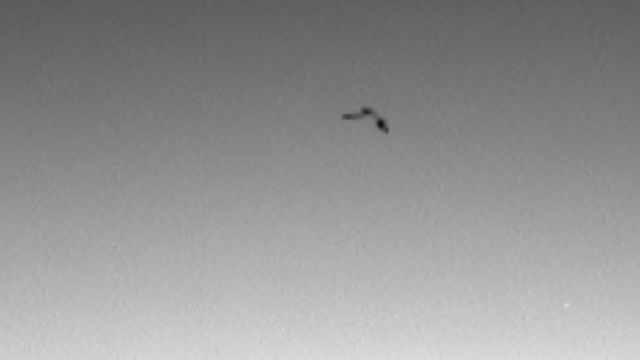 It moves across the screen so it's not anything on the camera lens. Link to official NASA raw image can be found in the official NASA link at the bottom of this page.

Full resolution can be found here. 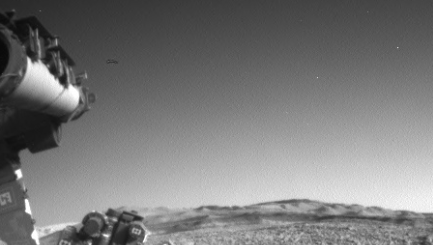 Link to official NASA raw image can be found here:

Full resolution can be found here:

It's here, get the Mars bar out you've been saving for victory or is that just me?


I wanted the find of Aliens on Mars to be celebrated with a Mars bar on purpose because of the delicious irony.

The proof of Mars life or Martians does exist and this proves it.

Also people think everything on Mars is being filmed on Earth because a freeckin bird on Mars?

It points to two things, one that this is a real bird on Mars and two this has been filmed on Earth all along? 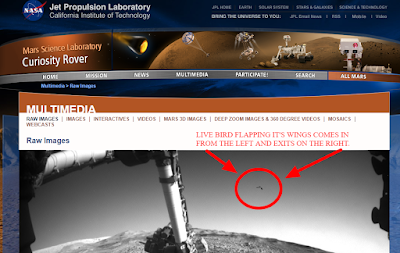 Scientists will tell us all one thing and that is there's no life on Mars?


So Mr scientist with all your diplomas and other sciences, gadgetry like appliances with machines from the future and things, please explain these images?

You'll probably have noticed there's wee bit of sarcasm and delight in my tone or choice of words and that's because there is.

Please come up with a really good science type explanation like this one:


"It's a proton entering the phase of spiritual blaze and harmony with a 2nd phase anomaly in the upper right federal segment in the eighth alignment with Sirius on the take from MIT with the constellation of Virgo influencing "ice cream production in CZV" on Earth at both poles to relax the camera molecules at 56 degrees"? 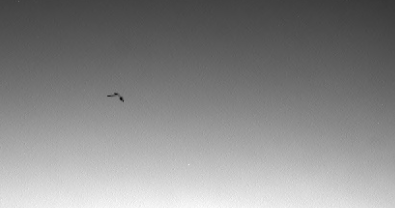 
The fact is all Mars scientists are liars and I'm standing by that.

I don't care if you pull out the most honest scientist you think you've got and everything and all he or she's ever done is right?

I don't care about the really good things NASA has done with charities and I certainly do not care for the lies and posturing by scientist.


Do you really want to know what I really, really don't care for anymore!

Being nice to NASA!

Why, because lives have been destroyed and whistle blowers and good peoples "whole lives have been made fun of" and criminalised by the people who said that there was life on Mars and NASA stood back and did nothing and doing nothing when you could of done something in my eyes is negligible and monstrous.

Their lives fell apart, by horrible people in the media (who have now accepted that Aliens are real) - and in their careers!

"NASA at anytime" since God knows when could of stepped in and said well actually, here's X, Y, Z proof - so don't tell me Mr scientist that your sorry but this is and how unfortunate life is or your sorry but it's out of your hands!

your all full of rubbish and I don't believe one word coming out your mouths at this point, Derek (if that's your real name?) Science is supposed to be a reliable source of facts, a go to for the public to get reliable records and not lies after lies.

Well this to me stinks of a cover up, conspiracy and lies. Because this bird MUST of had a parent, a brother bird or a sister so my question is this:

How long have you known there's birds on Mars?

How long have you been filming Mars scenes on Earth?

I remember seeing a live news segment where two anchors where excited about the very next news story they were reporting on? It was about a live spacewalk.

Anyways the cameras from the news anchors went to this live spacewalk and the camera "accidentally" cut to a full scale model of the ISS with a green screen next to it and a graphics technician standing over it positioning some model!

Immediately in the background shrieked the news anchorman, Oh gosh, I don't think we were supposed to see that? Since then, that has always been in my mind.

Then I see this guy in the same shot of another ISS spacewalk and the difference is that this guy in the window of the ISS (International Space Station) was wearing a scuba tank?

Then there's the disappearing astronaut before he got around a corner in the ISS.

The green screen wasn't lined up correctly so he disappeared 4 maybe 5 inches to early? It is isn't it, it's all horse sh*t?

Have you ever had the feeling where you've always wondered about something but then one day something happens and you take stock of the mounting evidence and then you make that decision you've wondered about for years?

Like you've finally finished that book you've been reading for 4 years?


It's a weird feeling that I've got at the minuet so I'm glad I'm writing about it so I can make sense of this epiphany like feeling.

Like now I realise that I'm no longer posturing or looking for more clues because I've just looked back at all my other clues and I'm thinking wow, I actually did lose myself in the clues but now I see clearly and now I can make sense of all the clues that I managed to unearth?

This is where I've been heading but didn't know it and until now I've never even contemplated the "end results" of gathering all these so-called clues.

What with this seemingly like a never ending clue journey and sometimes a clueless journey I suppose I thought I'd just be carrying on all the time...

Alas, there's life on Mars and that is not how thought it would sound especially now with 100% confidence. I actually feel quite, the same as before funny enough.

I suppose It's on to the next one.

I think I better look in to...

That's a to be continues moment, lol.

I remember doing this video a while back now about possible life on Mars and looking back on it, it is a pretty good job I did.

Who'd of thought I would be sat 100% confidant about life on Mars?

The bird in the images above I believe are real bona fide Birds, which is pretty weird when you think about it?