UFO case number 92092 was reported from Rio De Janeiro in South America on the 18th of May 2018 and this one looks really good as far as what we wouldn't expect to see and this one for me looks very interesting. It is leaving light trails in the sky, it is flashing on and off but not randomly and has all the hall marks of been for real? Lets wait and see what the results and tests bring in if any?
Sighting Details:

I was in my living room watching television, when I saw a plane passing through my house window. I've always been fascinated by UFOs, so I thought: what if this is not a plane? then I got up to look. it really was a plane, but when I looked ahead, there were several white and red dots flashing like Christmas lights in a straight line.

Image still from the video. 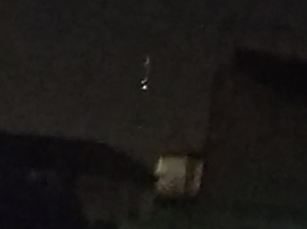 I thought it was some decoration, but then I realised it was impossible to be that. the object blinked like Christmas lights, several orbs one after another, some white and some red. and they went up and up and up. always together. I felt extremely excited, anxious. I was shaking at the time it happened, filming is not the best because the camera on my phone is limited and I was very nervous.


My hands were sweating. the object slowly faded, the orbs stopped blinking and disappeared into the darkness. after that, I was still in shock and started to have a stomach ache. I got sick and had diarrhoea, I do not know if it was something I ate or the shock, I think maybe the latter.

Image still from the video. 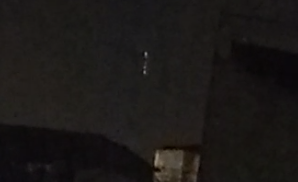 There's actually another 2 videos from this EPIC UFO SIGHTING in Rio. I've decided to feature this UFO sighting as it's Brazil, South America and there's a realness about any and all sightings that take place in Brazil as far as I'm concerned?

This was reported to MUFON and subsequently goes on to UFO Stalker on 18th 5th 2018 and was reported the very same day. MUFON case number #92092. Check it out guys this one looks like it's for real?