Weird Cliff In China Regularly "Lays Eggs" And It's No Yolk

Amazingly, EGGS are regularly laid in China! But with a difference, these are laid by a blooming wall. That's right, a wall lays eggs and they are considered lucky by Chinese people who regularly go there to collect them? 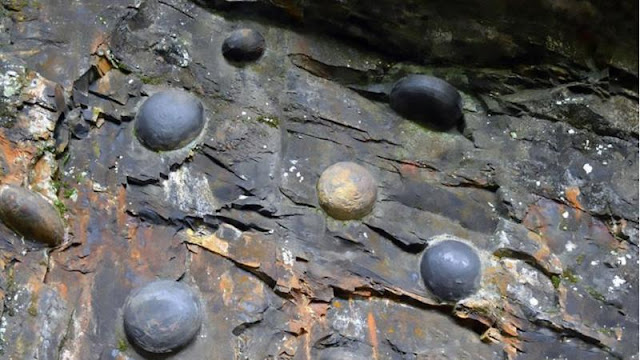 Near the village of Gulu in China's Guizhou province, there's a cliff face that looks like it was bedazzled by some primeval interior decorator. Smooth, colorful, egg-shaped stones jut out from the craggy rock, leading locals to call this cliff Chan Dan Ya, or "egg-producing cliff." What exactly creates these "eggs" is a mystery to visitors, but luckily, it's no challenge for geologists.


The Scientific Explanation The "eggs" that dot Chan Dan Ya are what geologists call concretions. You see, sedimentary rock like the one that makes up this cliff forms when water deposits minerals
the weathered remains of other rocks, usually in layers, which build up and weigh down on the layers below until they're compacted into solid rock. 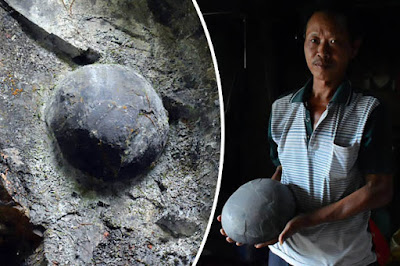 Concretions form when minerals gather around some sort of impurity, like a leaf, a shell, or even a soon-to-be-fossilized animal, and create a rounded mass of minerals. 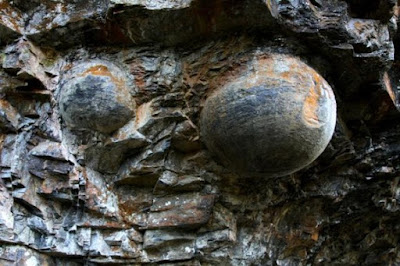 If those concretions are harder than the rock around them (as they often are), they'll eventually wear down the surrounding rock and break free. That explains why Chan Dan Ya "lays eggs" these hard, smooth stones weather out of the surrounding cliff face, and eventually fall to the ground to become a visitor's lucky trinket.

They might as well be lucky it took them millions of years to get there, after all. 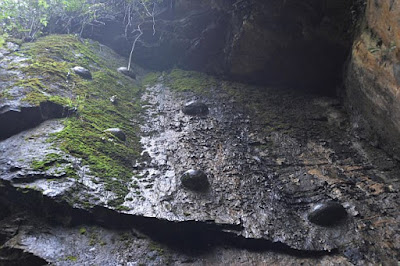